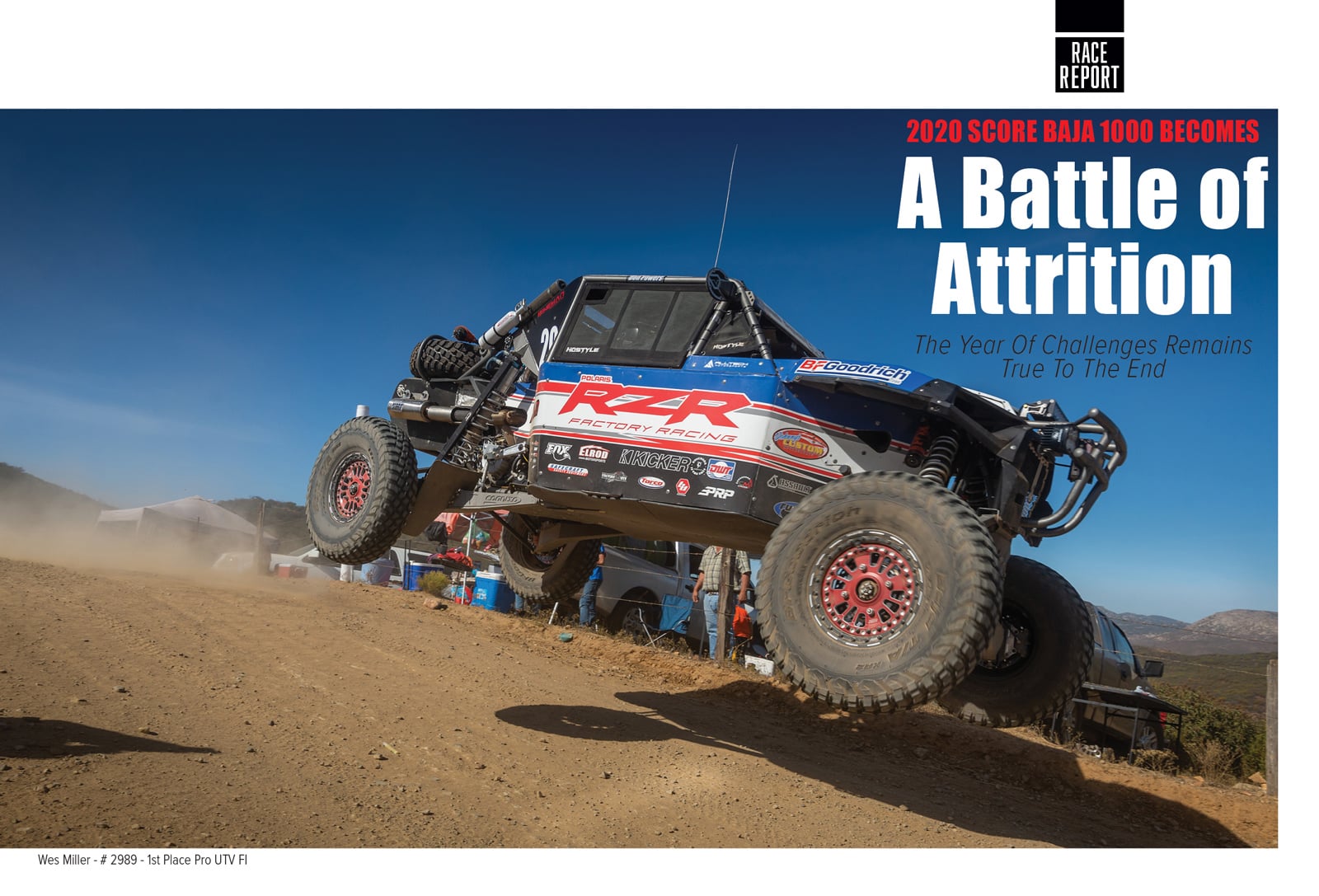 The Year Of Challenges Remains True To The End 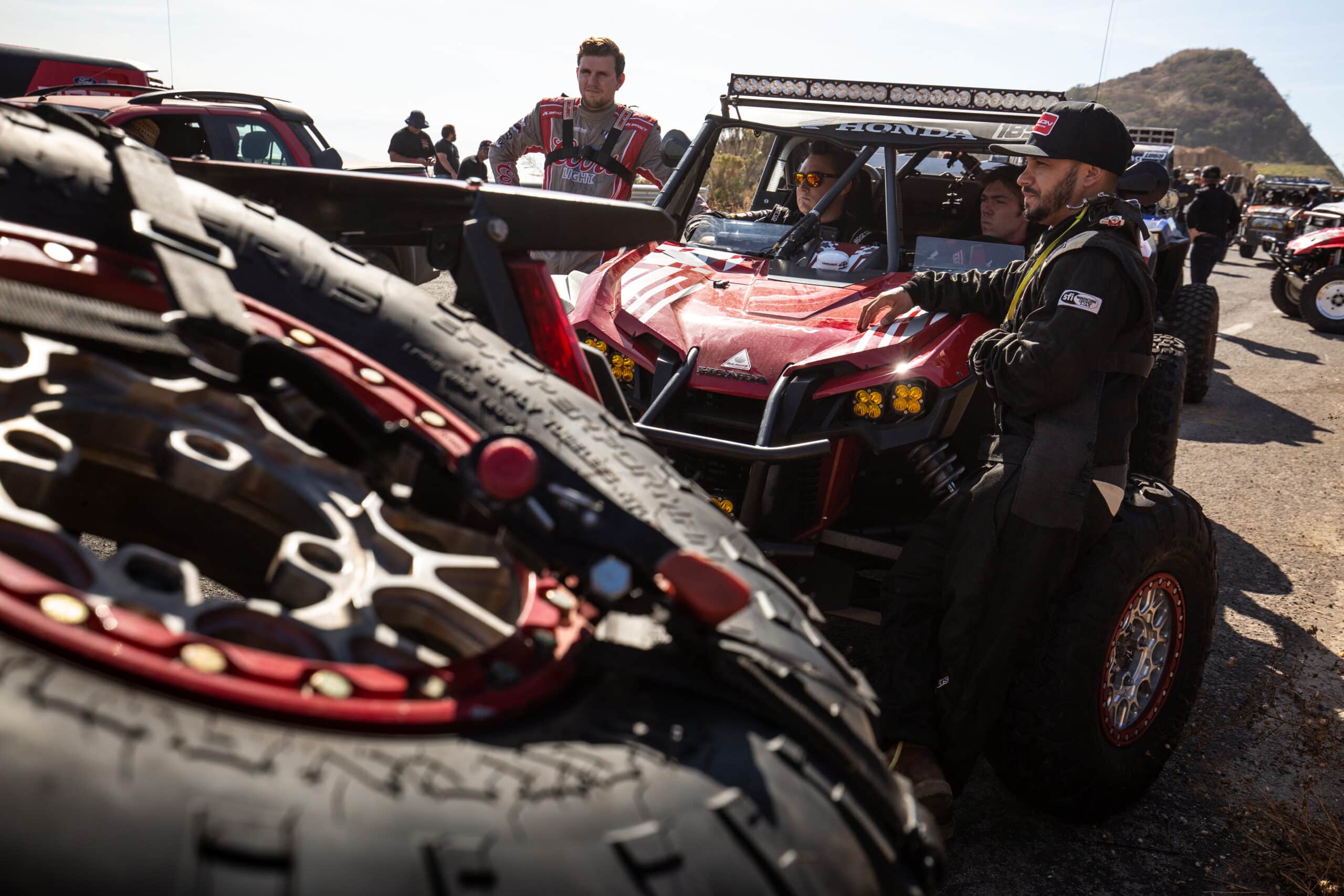 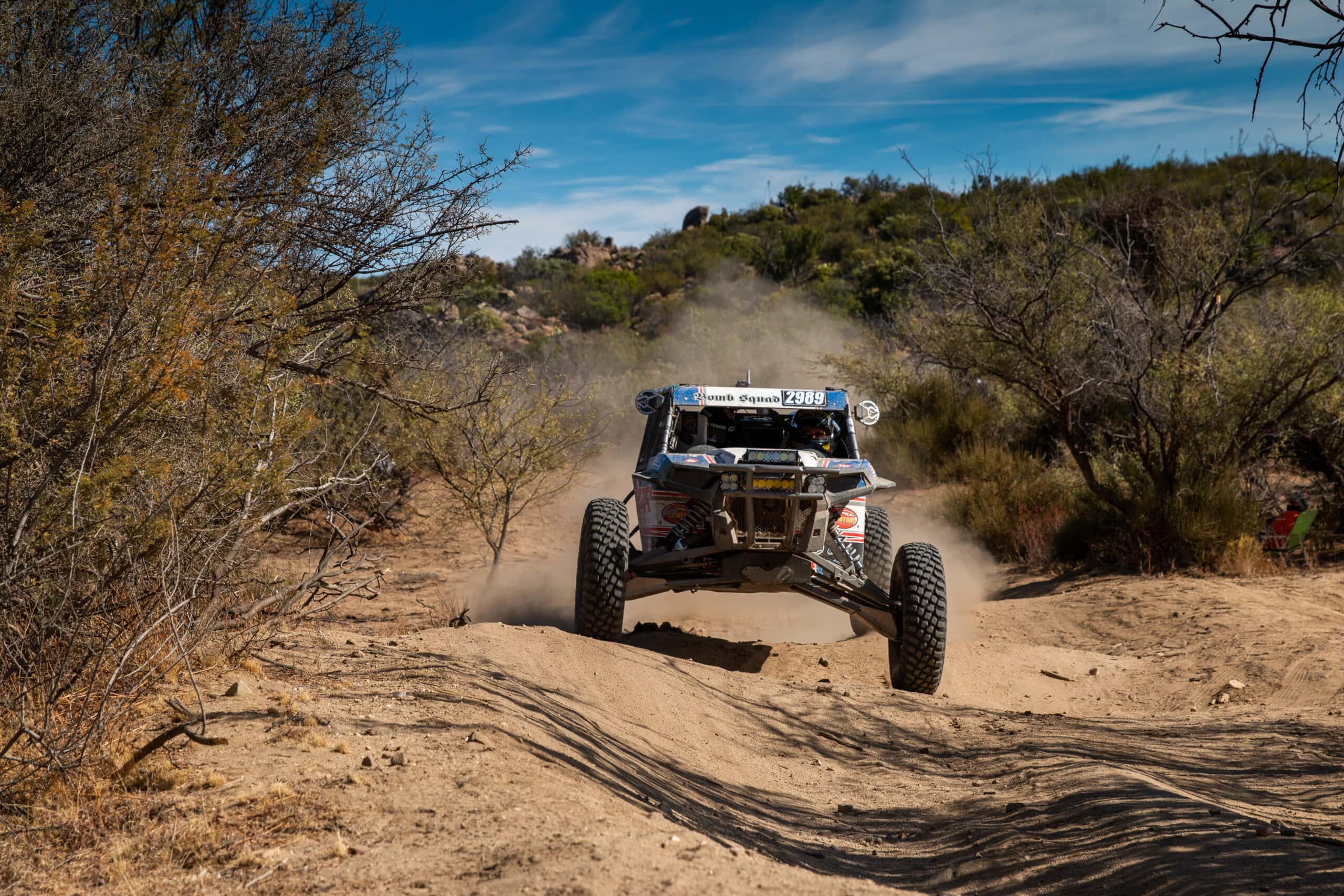 Nobody could have predicted the outcome of the 53rd SCORE Baja 1000 this year. SCORE has been consistently laying out some of the toughest courses imaginable, and the 2020 Baja 1000 was undeniably the toughest. Tight, twisty roads along steep cliffs would make up miles of the course, some covered in deep silt. The trail up and over to the San Felipe loop was littered with loose boulders that slammed into the underside of the cars, and made holding a line difficult. Race miles 200 to 400 were some of the most technical sections of the course. Once up, and over, the infamous San Felipe whoops were waiting. The whoops have gotten very deep over the years, and require the right speed to negotiate. Hit one wrong, and you can swap out, and crash. Go too slow, and you risk getting stuck in the sand. The best way through is to skip along the top. If you lose your momentum, you take a pounding until you get back up to speed, and they stretch on for miles. 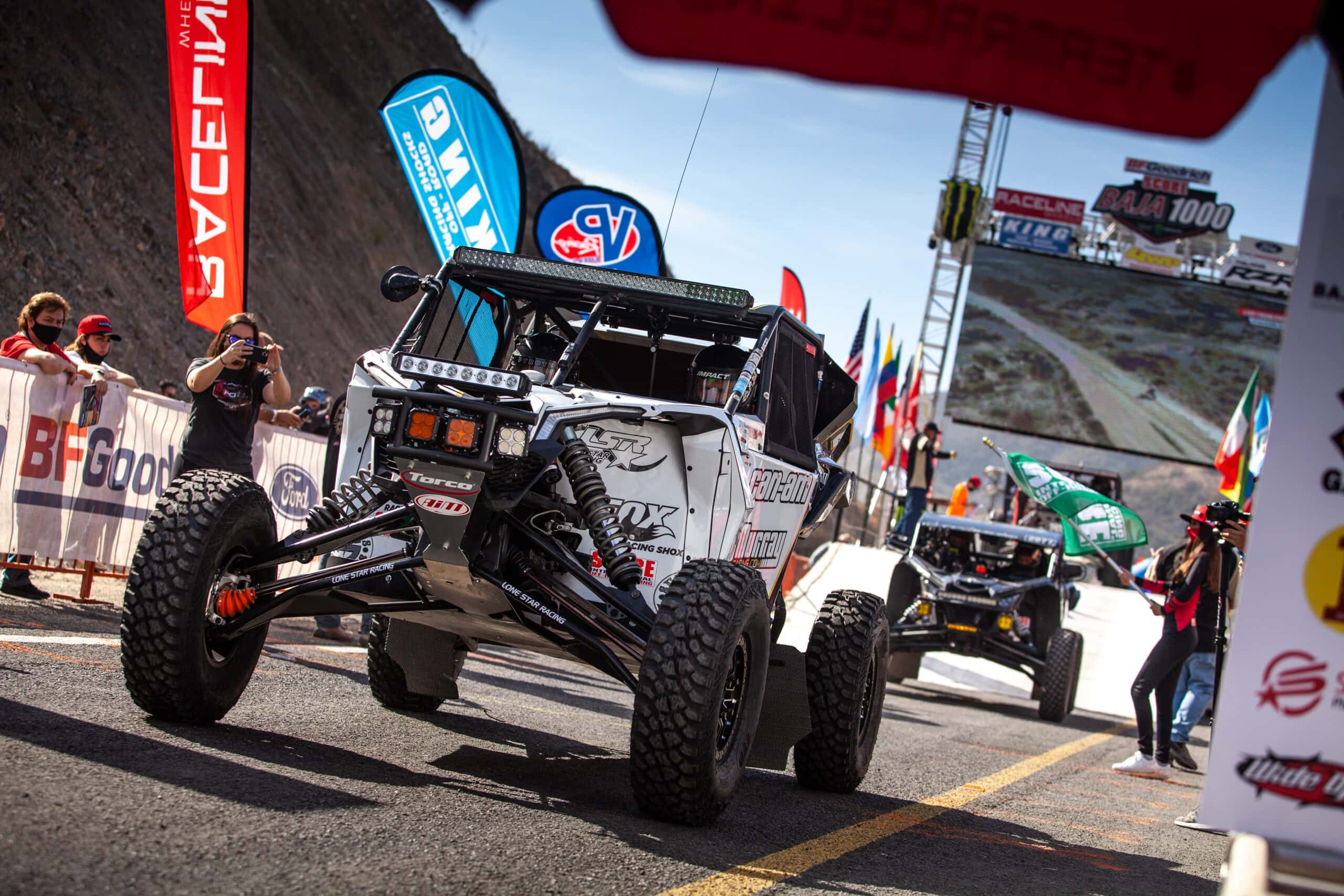 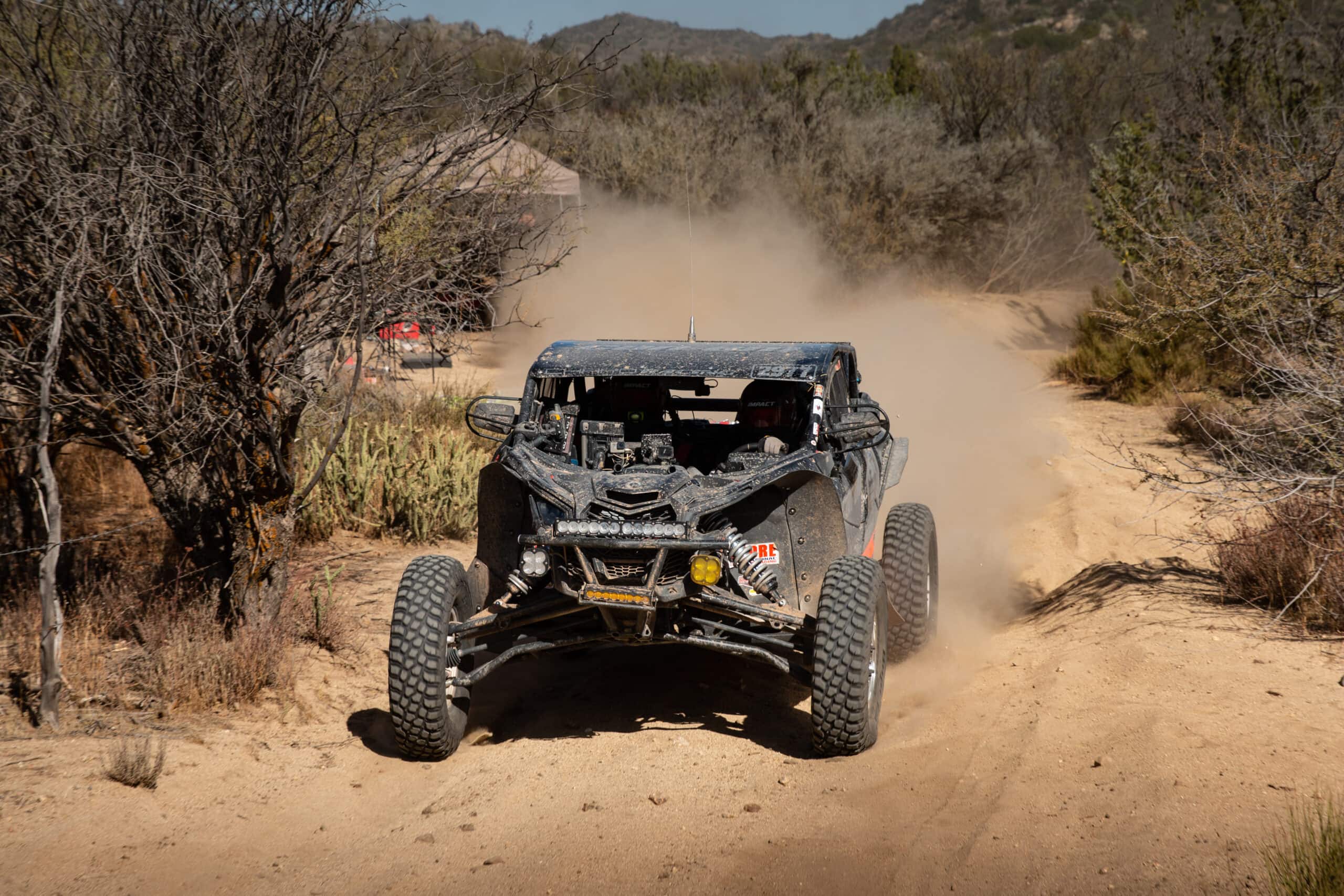 Then there are the dry river washes; Amarillas, Chanate, Huatamote and Matomi. The scenery is some of the most spectacular in Baja, but it takes concentration to navigate through them without hitting anything. After hours of pounding, a sense of urgency typically comes over you when the sun begins to rise. Those who have survived to the last third of the course were greeted by low level fog, and hanging dust due to a lack of any wind. Those final miles back to the finish are a confusing maze even with perfect vision. Running them with dirt caked eyes, and lack of sleep make them downright treacherous. There was no rest for anyone behind the wheel, navigating, or working in the pits during the race. Entries were admittedly down, but the level of competition was just as fierce. There is no more prestigious race to win than the SCORE Baja 1000.

It started out innocently enough with the drive down the Pacific coast. Despite the first leg being the kindest section of the course, by mile 200 it was already taking a toll on competitors; mostly due to the dust. Cars were stuck, cars were off the road, and cars were broken. They still had miles to go in order to complete the longest ever distance for a SCORE loop race; 898.4 miles. The top runners in the turbo class at the start were Jason Murray in the lead with Justin Lambert, Wes Miller, Craig Scanlon, and Mike Cafro on his tail. In the unlimited class, Brett Sourapas was leading with Honda teammate Elliot Watson right behind. Kaden Wells was out front in the naturally aspirated cars; ahead of Adrian Orellana, and Kristen Matlock. 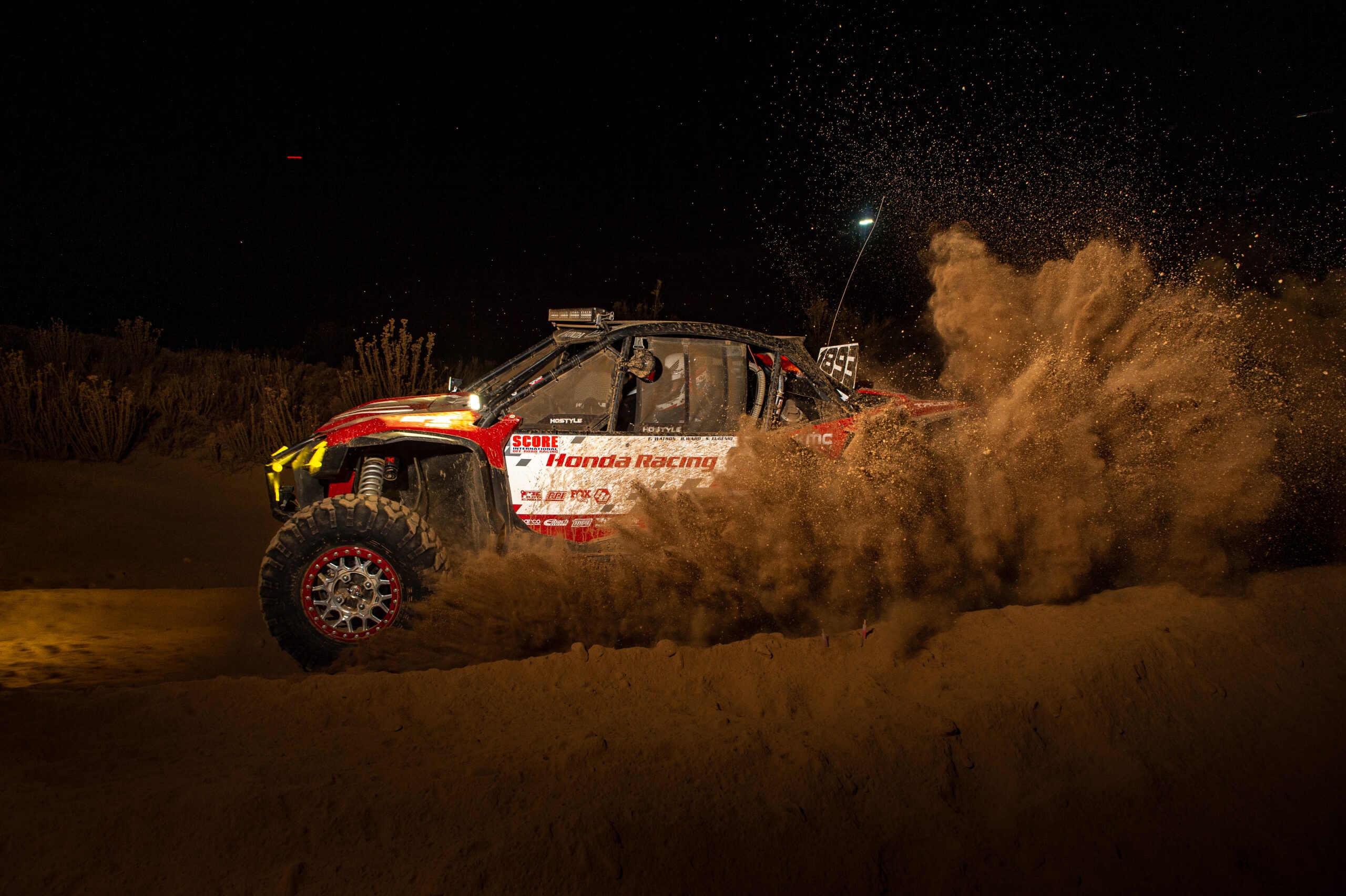 As the sun began to set, the adventure was just beginning. Miles of tortuous terrain had to be endured before anyone could sleep. Several teams had multiple drivers waiting to take on their own section of the course while many of the most hardcore drivers were willing to go the entire distance. It’s typical that the co-driver takes on huge responsibilities during the race. Navigator, mechanic, psychologist; they are a key asset in a race win. At the 1000, some teams will have a single driver the entire way, but swap out co-drivers along the way when they become too tired, or just plain worn out. Depending on the situation, there can be lots of work being performed changing flat tires, or wrenching, and god forbid, if you have to dig, jack, and muscle a stuck vehicle. The cars suffer an insane amount of abuse too. They need fresh parts, welding, and creative solutions in order to make it the distance. Great preparation, and quality parts go a long way, but teamwork, skilled drivers, accomplished co-drivers, and luck all play a big part. As the long night endured, some of the most competitive, and experienced teams were suffering failures. It became evident that this year’s race would be one of attrition. The run over the summit was incredibly harsh, and would take another toll on the field. After clearing the worst sections of the course, it seemed like the final portion of the race would go by quickly, but it wasn’t so. The final 50 miles or so were blanketed in a brutal layer of fog, and thick dust that made vision nearly impossible. The wet, and gritty mixture creates a horrible combination that sticks to visors, and feels like salt in your eyes if you lift your shield. 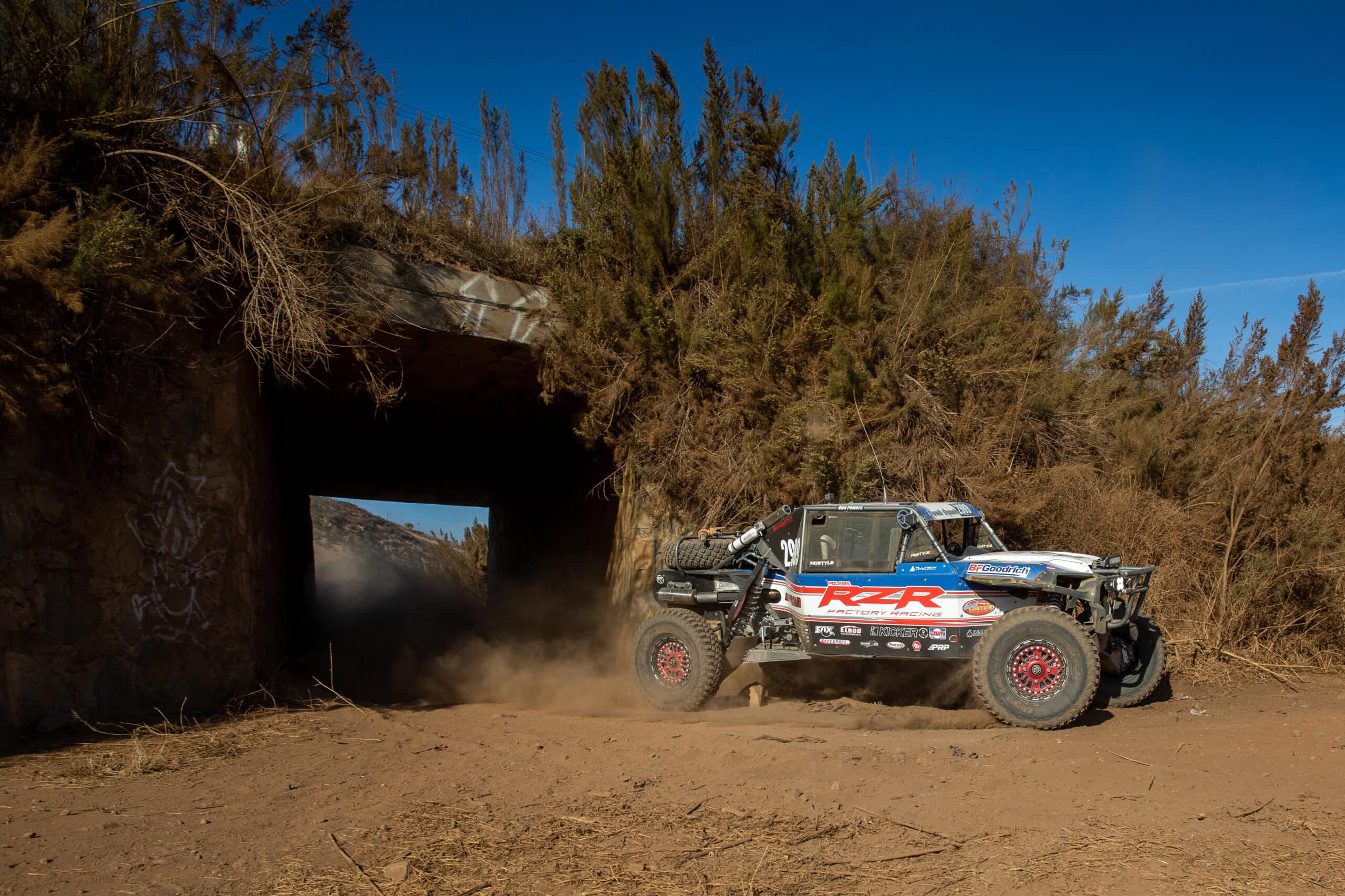 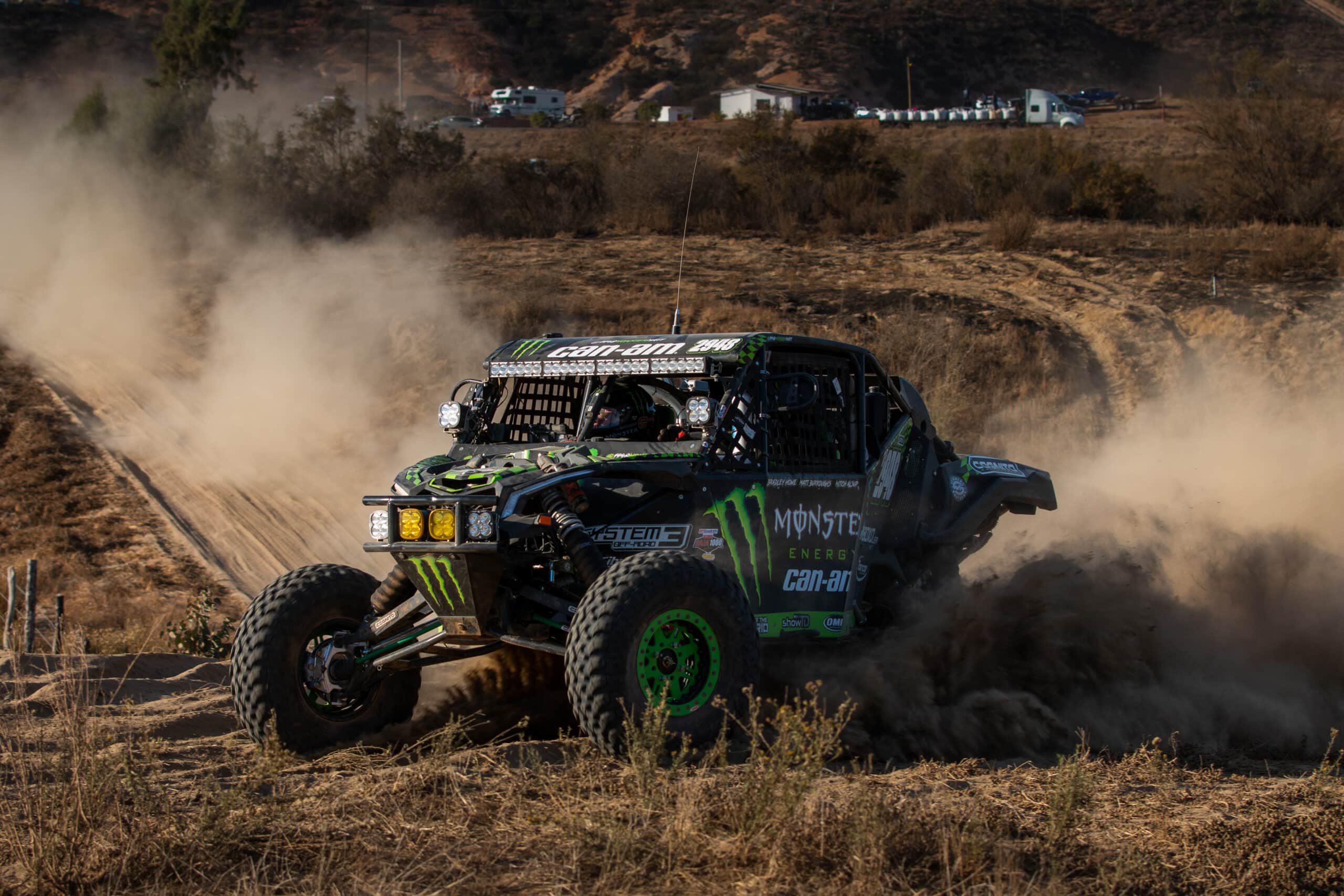 The final miles to the finish were an intense battle to the very end. It came down to 2 turbo cars, and 2 naturally aspirated cars that were clawing their way towards the finish line. Wes Miller was out front after leading much of the second half of the course. He suffered down time when his rear trailing arm retaining bolt broke, but he made quick repairs and got back out. Running in a pack that seemed to fluctuate depending on which tracker updated, and when, was Francisco Arredondo, Adrian Orellana, and Matt Burroughs. Wes Miller crossed the line first, followed by Arredondo in his brand new Raceco Honda Talon. It looked like Arredondo would take the overall win on corrected time from Miller, but a missed VCP would drop him to second overall, but still the winner of the naturally aspirated class. It was a Baja 1000 victory in a brand new Talon for the former SCORE Pro Moto Unlimited champion. 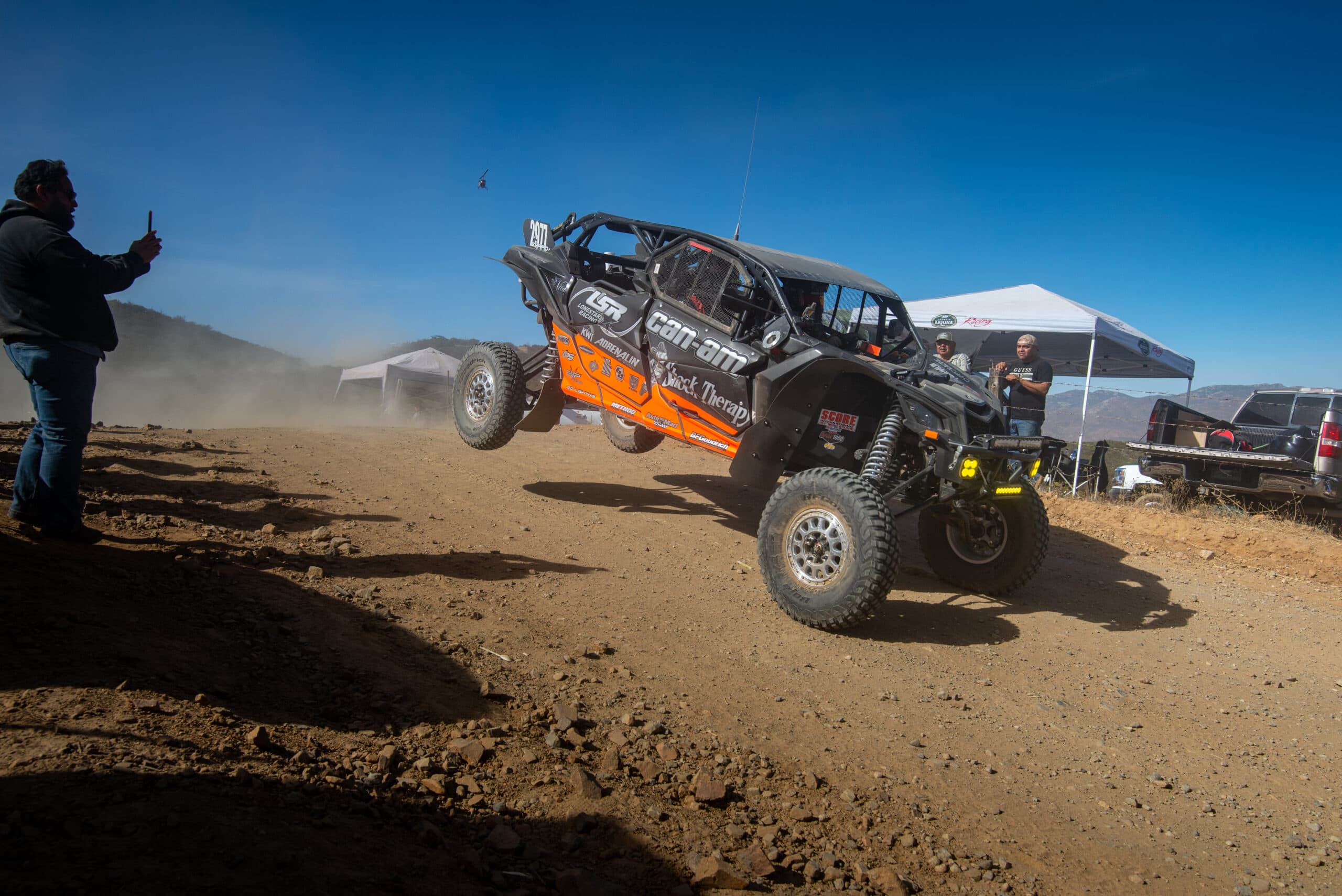 Next across the line was Mitchell Alsup driving the final leg for Matt Burroughs. “We are so pumped to win the overall UTV FI class for the 2020 season as well as the overall Score Championship,” said Burroughs. “We really wanted the 1000 win to go with our 500 win, but came up a bit short. Our Monster Energy Can-Am X3 was unbelievable all year here in Mexico. I want to thank both Bradley Howe, and Mitchell Alsup for sharing the driving duties with me, they were absolutely on point.” 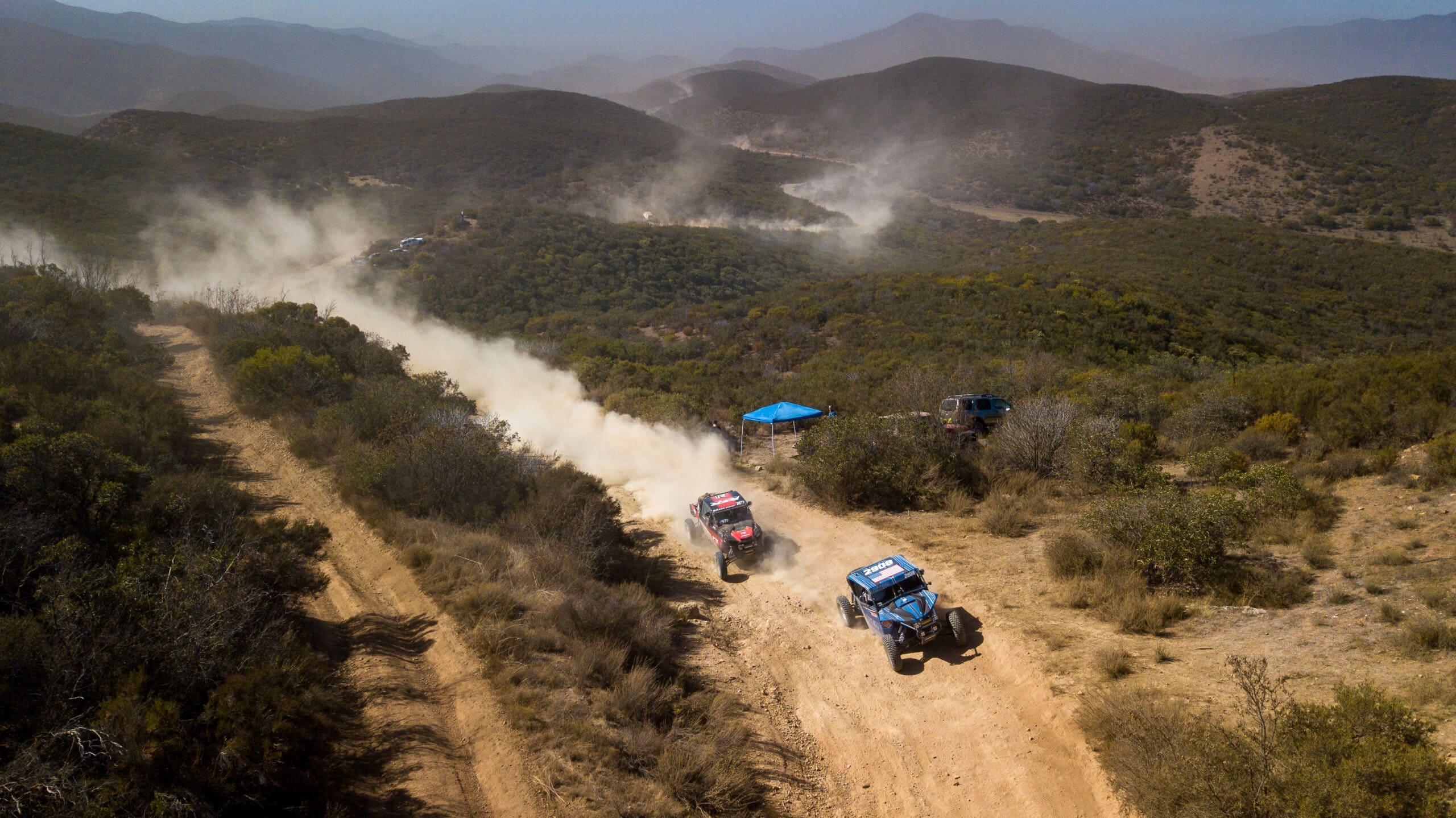 After spending some time in the pits at the highway crossing, Adrian Orellana finally made his way to the finish. He was one of the few racers who drove the entire distance without relief. He went through 3 navigators along the way. “We got a couple flats from hidden rocks,” said Orellana. “We were trying to make our way around a bottleneck when the ground gave way and we rolled the car. It took us 20 minutes to get back on the wheels and going.” 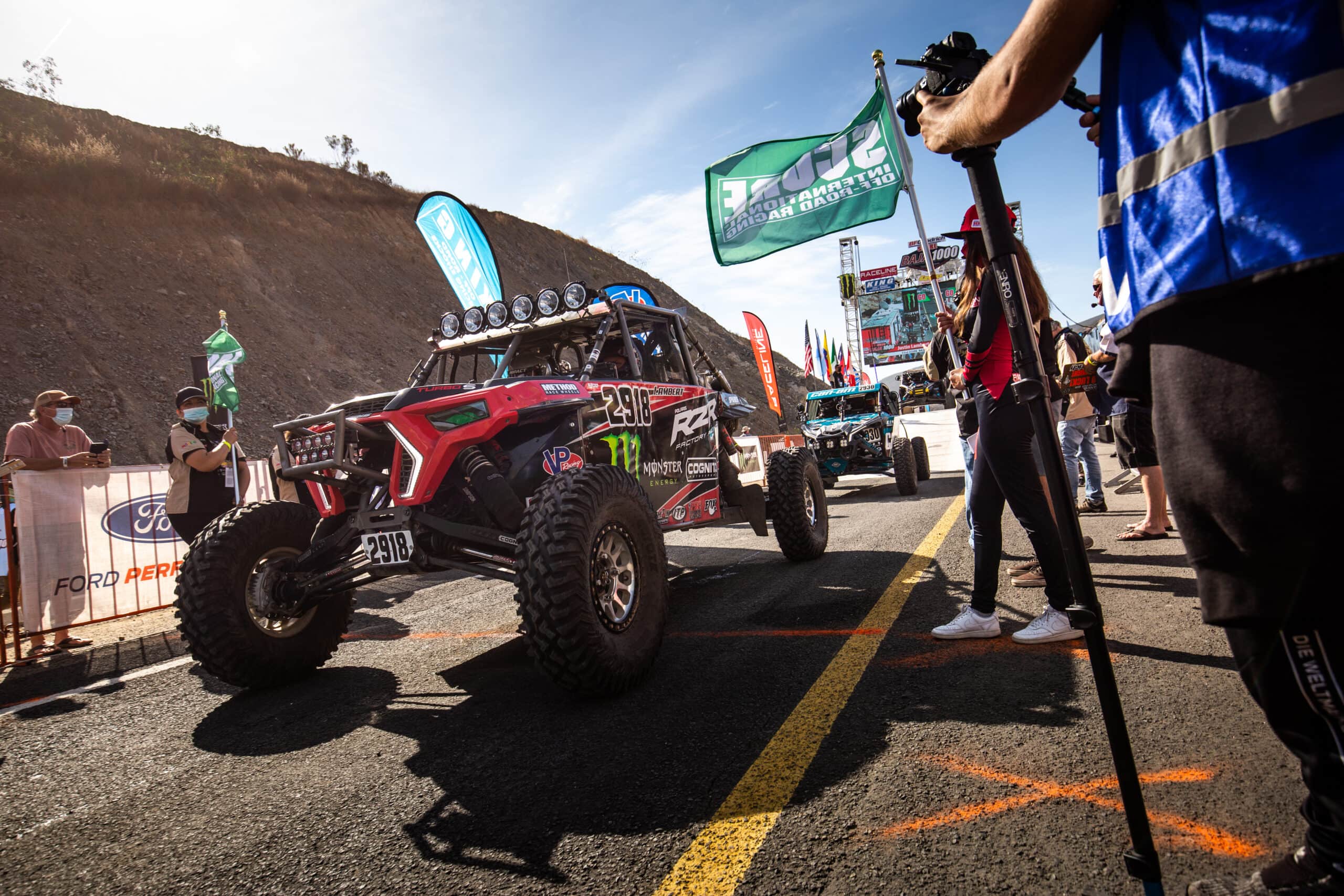 Marc Burnett crossed the line next in third place to take the final podium spot in the turbo class. Kaden Wells did the same three minutes later for 3rd place in naturally aspirated. Wells was the defending champion, but lady luck deserted him this year. “It was going good, and then it wasn’t,” said Wells. He lost all the coolant at race mile 200, then after getting going again had nagging problems along the entire way that cost him precious time. 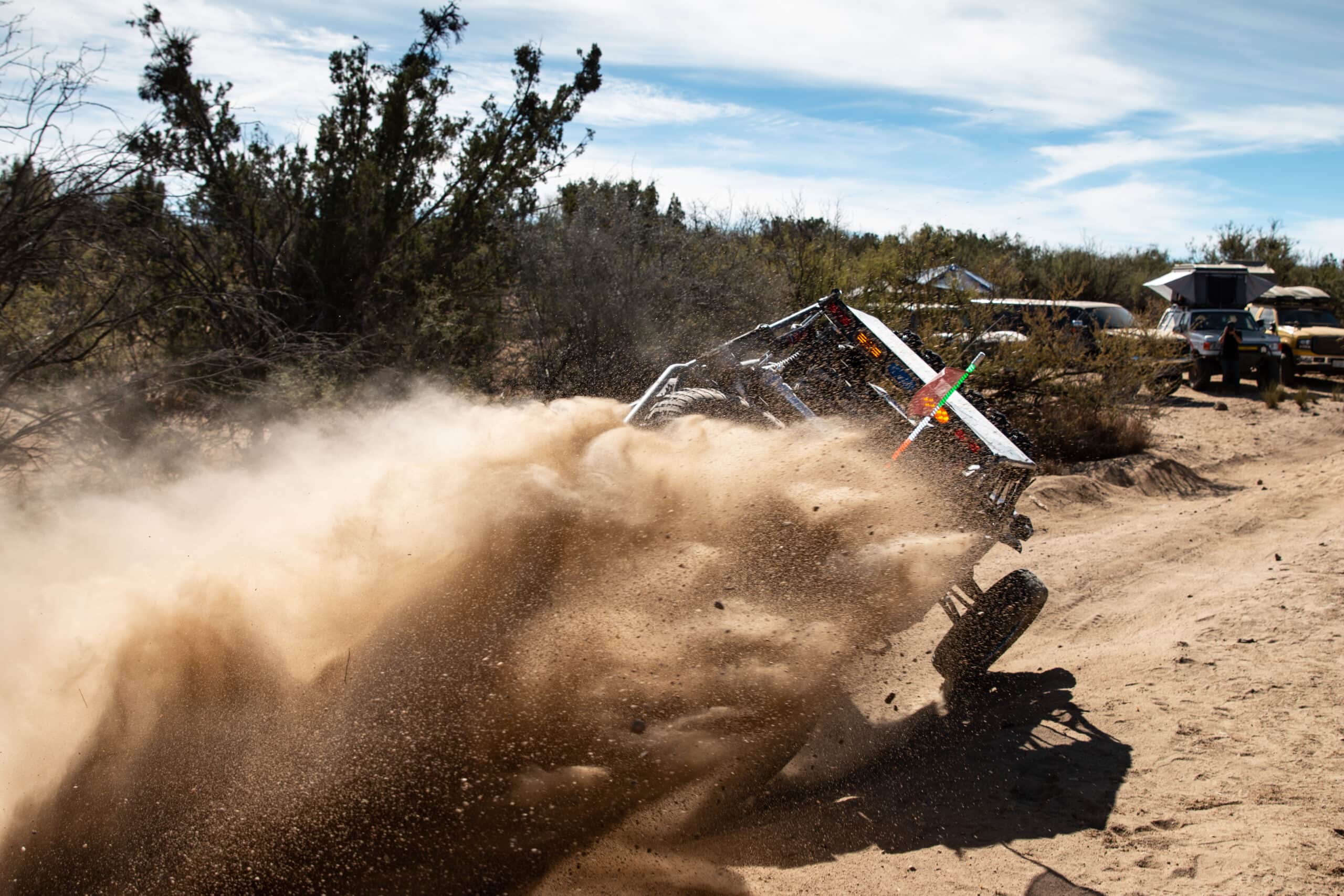 Elliot Watson won the Pro Unlimited class in his Honda Talon. He shared the wheel with fellow short course racer Bud Ward, and former SCORE Trophy Truck Champion Steven Eugenio. Elliot was running one-two with teammate Brett Sourapas, but Sourapas retired early in the race. He was not the only one who had insurmountable problems on the brutal course. Justin Lambert, Cory Sappington, Wayne Matlock, Craig Scanlon, Jason Murray, Justin Smith, Dave Sykes, Mike Lesle, and Mike Cafro were just some of the names that suffered a DNF (did not finish). In fact, Mike Cafro had 2 cars entered that failed to finish. When asked what happened Cafro said, “We broke a hub in Matomi wash in the Turbo car, and threw a rod in the Pro Stock car.” Our response was that he was way overdue for some good luck. His reply was “Not today Mike, not today.” 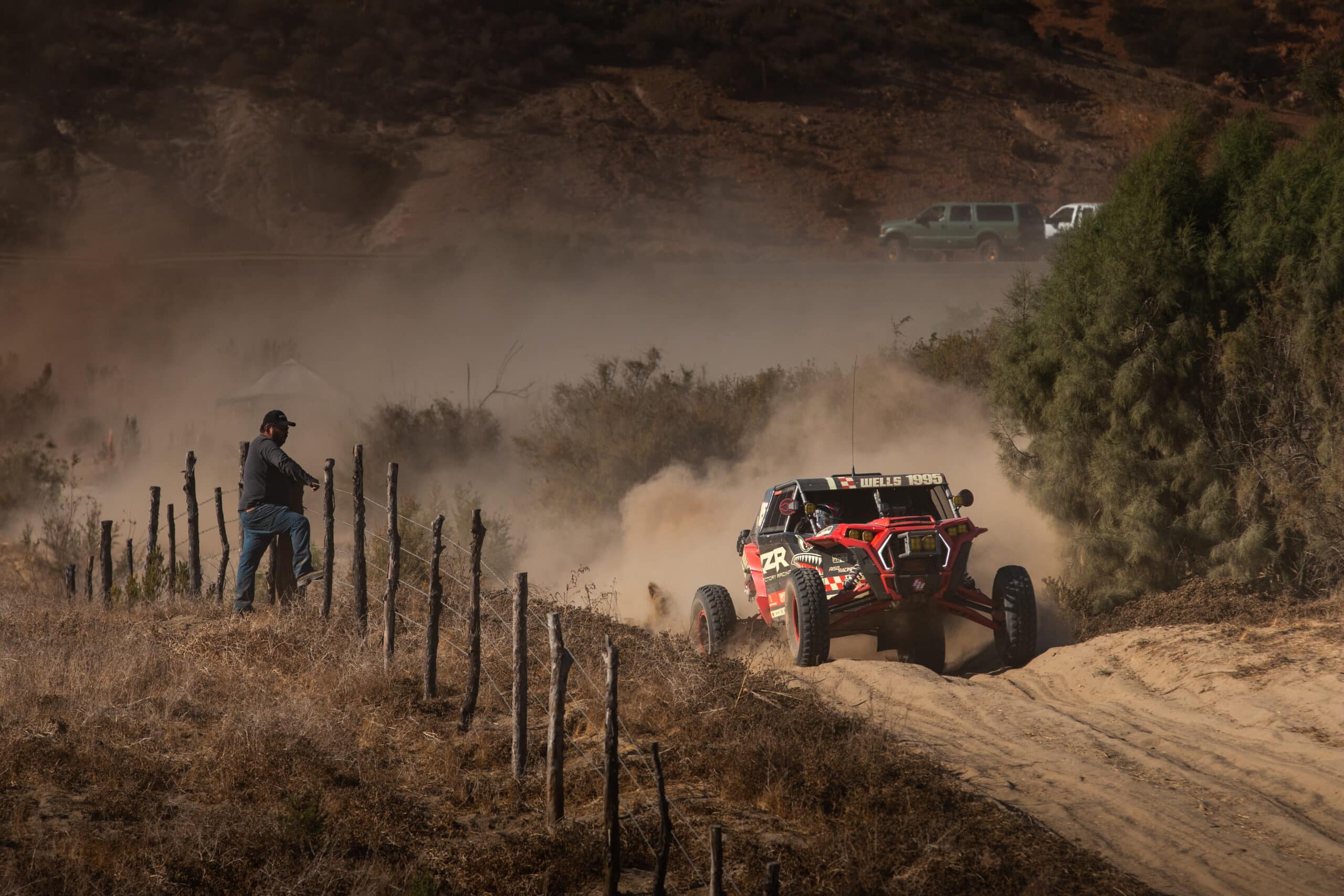 Speaking of the Pro Stock UTV’s, the win went to Carolina Sanchez from Calexico, CA. 2nd place was Dave Davenport, and in 3rd was Randy Emberton who beat the 40 hour time limit after racing for 39 hours, and 16 minutes. It’s always said after a tough Baja race that just making it to the finish line is a victory in itself, but I’ll go even farther. Just making it to a race this year has been a challenge for so many. Whether the teams finished the Baja 1000 or not, everyone was just glad to be racing!